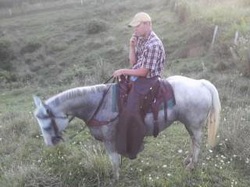 "Jim" is one of the Ranch's handiest horses. A home grown son of Levis White Limo and out of a daughter of Rowdy Dixon. Broke for everything from halter classes, games, working cattle and giving lessons. Has been shown extensively on the open show circuit, 4H and FFA.

"Dude" is a 2017 red dun gelding. Dude is out of Woodys Echo Downtown and Codys Tina Marie. He is an upcoming rider, he is a eager in your pocket type who will be used for ranch work. Dude's pedigree includes Mr Be Downtown, Winchesters Best, Hollywood Jac 86, and Mr Sugar Nick. 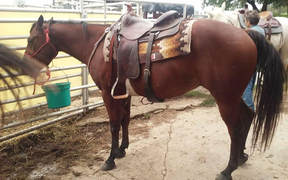 "Cowboy" is a 2012 AQHA gelding by Serengeti Two Eyed and Justa Chip of Cool. Born on the ranch he was purchased by Dean and Mary Leonard as weanling and has returned to the ranch to be a new partner in checking cattle and other work. Extensively trail ridden around the tri-state area as well as out west he has now been trained in more skills with cattle work for sorting and roping.

"Daisy" is a 2018 bay roan mare. She is a daughter of Shinycolonelfreckls and Lonsun Pansy. She is a great meshing of foundation working lines that the ranch will eventually use. Her pedigree includes many working lines including Chicks Magic Quixote, Colonel Freckles, Boogie Jackie, Heaths Pine Cutter.